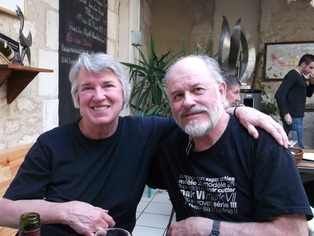 Having spent most of my musical life teaching, playing in bands, and recording on others’ CDs, I have decided to produce a CD of my original tunes. The title tune, Song for Sandy is a bossa ballad for my lovely wife and partner in all things. I originally wrote it for tenor pan (steel drum) and alto sax. My great friend and pan master, Carl Chase and I performed it during the ceremony at Sandy’s and my wedding in 1998. The new version on the CD will probably include vibes, bass and drums as well as Carl on double 2nds, a lower pan sound than tenor.

Thanks so the generosity of 93 backers, I was able to meet my goal of $7,500 on Kickstarter.  Those funds will be used to pay the musicians, most of whom are my colleagues at the John Payne Music Center.  http://www.jpmc.us, the studio time and production costs.

We will start recording on February 9th, 16th, and March 9th, 2014 and have the CD out hopefully by August, 2014. Some of the tunes will honor great musicians and composers such as, Jimmy Heath, His Heathness, Thelonious Monk, Monifized, and Mike Stern, After Stern, a vague reference to our beloved boat, “La Luz” which Sandy and I enjoyed for twenty years. Other compositions are tributes to friends who battled cancer bravely, Olivier, a drummer in an ensemble at the Center and Tell Me ‘Bout It for Miriam Hyman, a dear friend of my family and the JPMC family where she was the administrator for many years.

The styles will include swing, bop, latin, funk, waltz. Compositions will require groups of varying sizes from a quartet to possibly a tentette. Variety and fun will be the main ingredients of this project.  The CD will be co-produced by myself and Mark White.  Executive Producers are Chip Benson, the Cobb family, and David Elliott.


Sandy’s unique and beautiful artwork will grace the cover & the insert.